China Customs reports that goods imports in July fell by 6 % y-o-y in dollar terms, the same rate of contraction as in previous months. The biggest drop was seen in imports from the United States, but there were also major declines in imports from East Asian economies. The value of imports from the EU, Southeast Asia and Africa has risen slightly this year.

China’s goods exports are running at the same level this year as in 2018. With contracting imports and stable export levels, the goods trade surplus increased by 60 billion dollars from year earlier to 226 billion dollars for the January-July period. 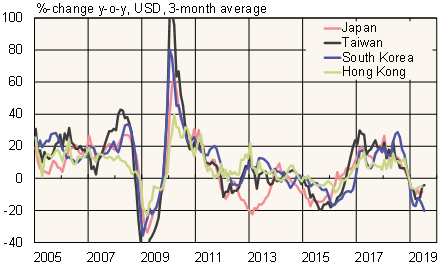