At the start of this week, the so-called OPEC+ league of oil producing countries reached agreement on extending production ceilings of its members by nine months. The agreement is non-binding.

The agreement reaffirms the cuts that were agreed on last December. Then participating countries agreed to cut their daily output by 1.2 million barrels or about 3 % from the October 2018 level. Official figures show that OPEC+ met its overall target this spring. Even with the production ceilings, the oil price has remained at about 60 dollars a barrel.

The parties to the agreement include the 14 members of the Organization of Petroleum Exporting Countries (OPEC) and ten other oil-producing countries. The lead duo are Saudi Arabia and Russia. With a few exemptions, the parties control African, Middle Eastern, Central Asian, Uralian, Siberian, Malaysian, Mexican and Venezuelan oil fields. That said, production in Venezuela and Libya has already collapsed due to domestic strife. Figures released by British Petroleum for 2018 show that OPEC accounted for 42 % of global oil output, Russia 12 % and other nine OPEC+ members 7 %.

The OPEC+ group first agreed to production ceilings in October 2016. The agreement has since seen evolving interpretations and restrictions lifted occasionally. The agreement is seen as the response of Saudi Arabia and Russia to increased North American shale oil production. With advances in shale oil extraction methods, US oil production has doubled over the past decade. The US and Canada accounted for 22 % of global oil output last year.

Although Iran has earlier refrained from committing to cuts, it in principle supports the agreement. However, it is displeased about the bilateral cooperation of Saudi Arabia and Russia. Iran says the alliance conflicts with the common goals of OPEC. Russia’s activity could also be seen as part of Russia’s general efforts to develop deeper economic relations with Middle Eastern countries. 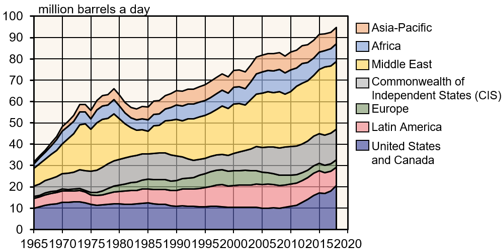