The China National Bureau of Statistics reports that the country’s on-year growth in real industrial output slowed from 5.4 % y-o-y in April to 5 % in May. If the exceptional figures occasionally posted during the January-February Lunar New Year festivities are excluded, China has not officially announced such low growth since the early 1990s.

While China’s official figures leave much to be desired, it is notable that industrial output growth in the first five months of this year averaged just 5.9 %, which was about 1 percentage point lower than a year ago.  According to the main purchasing manager indices (PMI), industrial output in May was essentially unchanged from April.

China’s car industry, once a major driver of economic growth, has seen its value-added trend decline in recent months (down by 5 % in May). The China Association of Automobile Manufacturers reports that over the past 12 months fewer than 22 million passenger cars have been built domestically, a decline of 13 % from last year. May output was down 24 % from May 2018. There is no quick fix for the car industry. The leading finance magazine Caixin reports that the central government does not intend to provide special subsidies to carmakers as earlier planned. Manufacturers also have to unload 3 million cars in inventory built to old emission standards before the new standards enter into force next summer.

Chinese growth continues to rely increasingly on growth in the service sector. Real growth in retail sales picked up from 5.1 % in April to 6.4 % in May. Real growth in retail sales in the first five months of this year was just 6.4 %, however, down from over 8 % in the same period a year earlier. The various purchasing manager indices showed that production of services continued to enjoy robust growth, but indicated no further acceleration in growth. 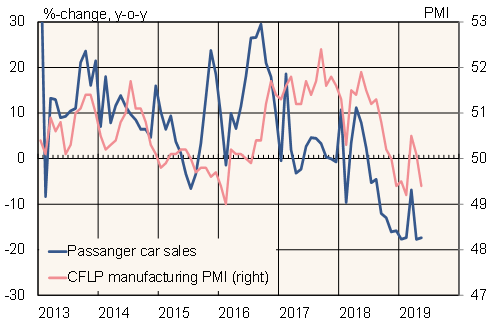