Share prices in China have been buoyed recently by expectations of continuing economic stimulus policies. Surprisingly strong GDP numbers, however, have dampened hopes for additional stimulus. Since the GDP figure was released on April 17, China’s main share indices have declined, dropping by 6 % in Shanghai and 8 % in Shenzhen. For all of 2019, share prices are still up 23 % in Shanghai and 29 % in Shenzhen.

Trading of foreign investors on mainland bourses via Stock Connect arrangements with Hong Kong has increased significantly in recent months in conjunction with increased trading activity in China. Nevertheless, the share of Stock Connect transactions relative to overall trading volumes has changed little and only accounts about 8 % of the daily trading volume in Shanghai and just 6 % in Shenzhen. At the end of last year, foreign ownership in mainland China stock markets was about 2.6 % of the total market cap. The value of foreign holdings fell late last year along with the fall in stock prices.

Shanghai is currently establishing a new Sci-Tech Innovation Board, which is scheduled to begin operations in June. The listing process under the new arrangement should be faster and easier than at present, and will not require e.g. that firms demonstrate a track record of profitability or place strict limits on listing prices. China’s rules have forced the largest Chinese IPOs in recent years to be staged in Hong Kong or New York. The goal of the new listing process is to encourage Chinese tech giants to stage their IPOs in China. 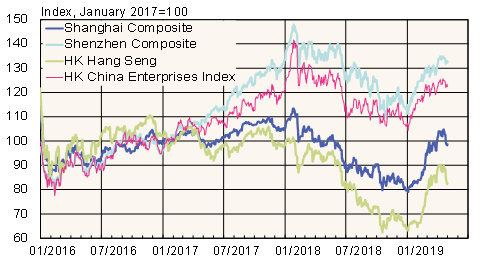