2018 budget revenues were up 29 % last year. Much of the gain came from higher revenues from oil & gas taxes, which saw a boom especially in autumn. The price of Urals-grade crude oil in early autumn hit 78−79 dollars a barrel, while weakening of the ruble’s exchange rate raised the ruble-denominated oil price to an all-time high. Revenues from oil & gas revenues accounted for 46 % of all federal budget revenues in 2018, with the ratio of revenues from energy products to GDP rising to nearly 9 %. During the 2011−2014 peak period, the ratio was only slightly higher (9.3 %).

Growth in other budget revenues accelerated to over 14 % last year mainly thanks to a 17 % increase in value-added tax revenues. VAT revenues accounted for 58 % revenues of other than oil & gas revenues. VAT’s share of other revenues has not been this high in roughly one and a half decade. Revenues from corporate profit taxes and dividends from state-owned enterprises also increased substantially.

The federal budget surplus rose in 2018 to a level equal to 2.7 % of GDP. The last time the federal budget showed such a large surplus was in 2011. Federal cash reserves also rose significantly in the second half, finishing the year at nearly 10 % of GDP. The sum includes liquid reserve fund assets (i.e. National Welfare Fund). The boost in assets was partly driven by oil prices well in excess of the basic calculation price defined under the fiscal rule (last year’s calculation price was just under 41 dollars a barrel). The Russian Federation last year issued ruble bonds equivalent to roughly 1 % of GDP. Repayments of ruble-denominated bonds corresponded to 0.5 % of GDP. 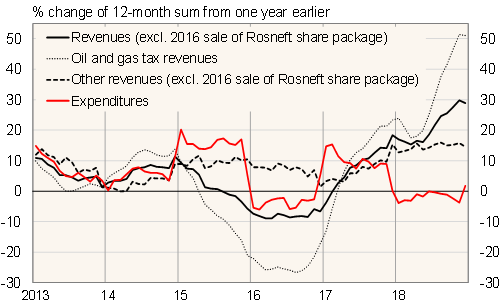