China’s economic conditions deteriorated last year as its trade war with the US heated up. Impacts were evident in falling share prices, heightened depreciation pressures on the yuan and financial market spasms. While the triggering factor for market anxiety was the US-China trade war, the roots of the worries are in China’s domestic problems such as slowing growth and burgeoning debt.

Share prices on the Shanghai stock exchange fell by about 25 % last year. Overall, China’s major stock exchanges lost roughly 2.4 trillion dollars in market capitalisation, an amount roughly equal to 18 % of estimated 2018 GDP. The evaporation of asset value had a knock-on effect that hurt consumer demand as households in China hold an exceptionally large portion of all shares.

The yuan’s exchange rate strengthened against the dollar early last year, then began a downward spiral in April as trade tensions increased and the US central bank moved forward with interest-rate hikes. At the end of 2018, the yuan-dollar rate was down 10 % from its April level, even if the decline for all of last year was just 6 %. The yuan gained about 1 % last year against the euro.

The manufacturing purchasing managers’ index (PMI) released on the cusp of this year suggests that industrial output growth came to a halt in December, when both the official and Caixin/Markit PMI readings dropped below 50. Chinese growth is increasingly dependent on services, and the services PMI readings are still above the 50 mark. 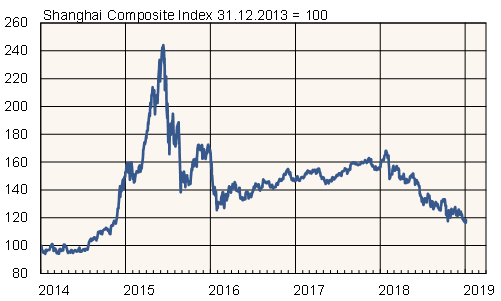