China customs reports that the value of goods exports in November rose by 5 % y-o-y, while the value of imports was up by just 3 %. For the January-October period, exports climbed by more than 10 % and imports by over 20 %. The rapid slowdown in import growth was not due only to declining commodity prices on the global market, but rather from the evaporation of growth in imports of machinery, equipment and related components.

Growth of Chinese goods exports to the US in November remained strong. In contrast, goods imports from the US declined by 25 % y-o-y. As a result, China’s trade surplus with the US sored in November. Exports to the US were driven by strong economic growth in the US and anticipatory stocking-up on fears of impending tariff increases. United States customs figures show that goods imports from China already declined for those goods affected by the first round of additional tariffs in July and August.

China and the United States are still trying to negotiate a solution to their differences and end the trade war. China promised to buy even more American products and get rid of the additional tariffs imposed on American cars in July. Moreover, media reports claim China is even planning changes to its “Made in China 2025” industrial policy programme.  It is hard to imagine, however, any quick fix to the situation as most of the reforms required take a while to implement even with the political will needed.

Already struggling trade negotiations were not helped last week by the US-ordered arrest of Huawei CFO Meng Wanzhou in Canada. The US accuses Meng of misleading banks about prohibited trade with Iran in violation of US sanctions. Meng was freed on bail in Vancouver, British Columbia, to await possible extradition to the US. China considers the arrest a political stunt, condemning it in the strongest terms. The Chinese government this week arrested two Canadians “on suspicion of engaging in activities that harm China’s state security.” 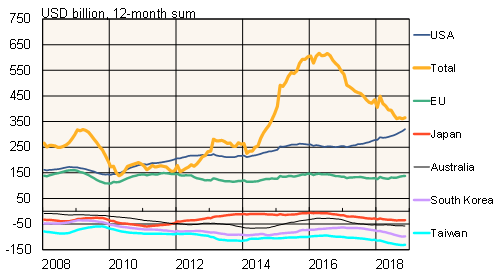