Fixed investment was up by over 5 % y-o-y in the third quarter of this year. In the first six months, on-year growth exceeded 3 %. For the entire January-September period, growth was slightly over 4 %.

After two years of growth, fixed investment by large and mid-sized firms in crude oil production declined by a couple of per cent in January-September. In contrast, fixed investment in natural gas production increased by nearly 50 %, even if investment growth in the branch was already brisk in the previous two years. Last year’s notable recovery in natural gas pipeline investments has continued this year. Large and mid-sized manufacturing firms markedly increased their investment, although the level of investment was still low in light of a steep three-year slump.

Share of investment of large firms, mid-sized firms and the Russian state in total fixed investment 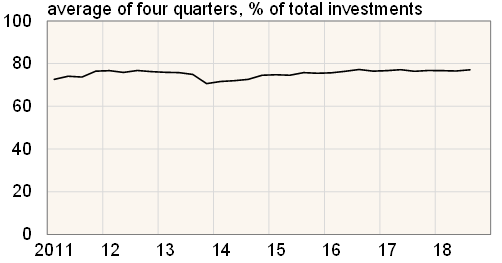