Given the low expectations going into the G20 summit that the US and China would make progress on resolving their trade differences, the 90-day postponing of further sanctions was enough for both sides to put a positive spin on their meeting. Market reactions in China and the US, initially positive, grew more pessimistic as the week progressed, partly with news of the US-ordered arrest in Canada of Huawei CFO, Wanzhou Meng on December 1.

In the wake of the summit on Monday (Dec. 3), prices on the Shanghai stock exchange rallied nearly 3 % from their Friday levels, only to fall slightly later in week. Chinese stock performances this year have generally been weak, so the hoped-for injection of optimism gave way on Tuesday (Dec. 4) to uncertainty over the feasibility of resolving complex trade issues in a brief period. On forex markets, the yuan was up over 1 % against the dollar, only to weaken again to around 6.88 by Friday (Nov. 7). 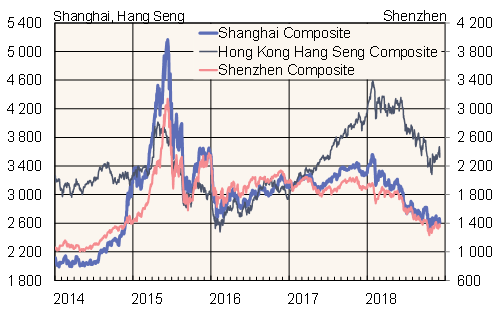