The finance ministry expects federal budget revenues to increase next year by about 5 % relative to this year’s expected revenues. Oil and gas tax revenues are expected to decline by a few per cent, if the price of Urals-grade crude oil falls according to the assumptions of this year’s supplementary budget. The price is expected to average 70 dollars a barrel this year and 63.4 dollars a barrel next year. In contrast, other revenue streams will rise by 15 %. Nearly a third of the gains will come from the increase in value-added tax at the beginning of 2019. Another third is related to increases in value-added tax revenue for other reasons. Dividend income from state-owned enterprises is expected to soar as well.

Federal budget spending will rise next year by a few per cent from this year’s forecasted expenditures. Federal budget expenditures excluding transfers to regional budgets and state social funds will correspond to 12 % of GDP. In nominal terms, defence spending next year will be roughly the same as in 2017 and 2018.

The 2019 federal budget is expected to produce a surplus equal to 1.8 % of GDP. However, the Russian government will take on new debt. This is because under the calculated low price of oil in the budget rule a large share of oil tax revenues must go into the National Welfare Fund. The total value of the assets in the Fund is expected to correspond to 7.5 % of GDP at the end of next year.

State social funds are a significant part of Russia’s public finances, as the expenditures of these funds equal to 11 % of GDP. Tax revenue received by the funds consists almost entirely of mandatory social contributions collected from corporations. According to the budget, revenues to the Pension Fund, which is the biggest fund by far, will grow next year so well that transfers from the federal budget to the fund will remain unchanged. The fund’s expenditures will increase only slightly as the general retirement ages begin to rise next year. In line with the guidelines set forth by the government through 2024, pensions will go up by 7 % at the beginning of next year. However, pensioners who continue to work are no longer entitled to such across-the-board pension rises. Rapid growth in revenues and spending of health insurance fund will continue. 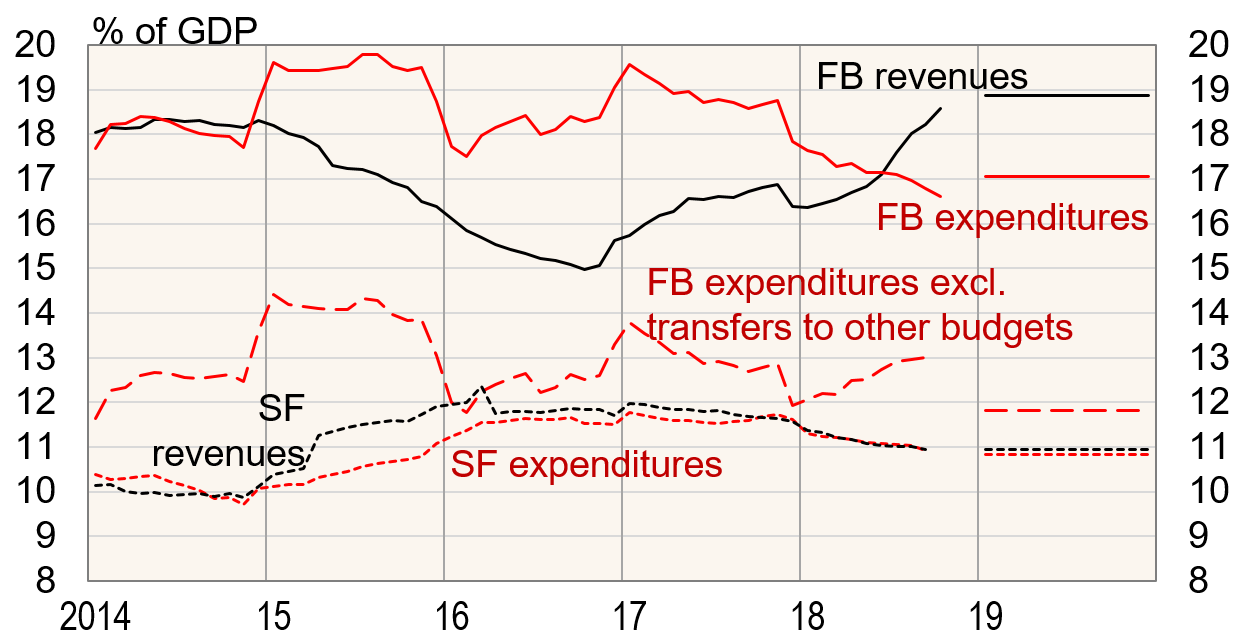