Just-released balance-of-payments figures show China with a current account deficit of 13 billion dollars for the first nine months of this year. During the same period last year, the country produced a 103-billion-dollar surplus. Small surpluses in the second and third quarters were inadequate to erase the first-quarter deficit.

Higher prices for commodities helped reduce the goods trade surplus from the same period last year. About 80 % of the services trade deficit this year came from tourism. On an annual basis, the current account is still in surplus though just below 0.4 % of GDP.

The financial account shows that considerably more capital this year flowed into China in the form of direct investment than last year. The direct investment balance in January-September showed an 81-billion-dollar surplus. Other balance-of-payments figures will be published later. Other measures, however, suggest a slight increase in capital outflows this year. 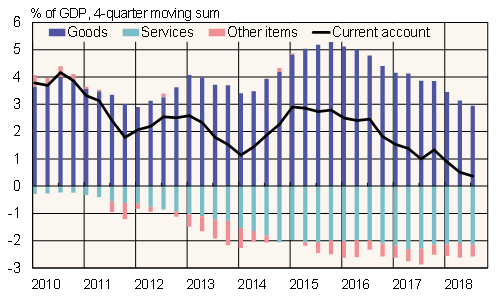