Chinese solar panel producers have been required by the EU for the past five years to sell their products within the EU-area at prevailing prices, or at least a minimum price defined by the European Commission. If the price went below the official floor, Chinese imports were subject to heavy import duties. Over the years, the price floor has been lowered gradually. The temporary import restrictions have been extended through a series of expiry reviews, with the latest period ending at the beginning of September. Reuters reports that the European Commission now plans to let the anti-dumping import duty scheme expire on its own and allow solar panel producers to set whatever prices they wish.

Some solar power generated in China goes to waste due to inadequate demand, a lack of storage capacity and transmission grid limitations. Concerns over inefficient investment and overcapacity have arisen recently. Government support has been implemented through bank sector financing, which has allowed some solar firms to expand by taking on massive debt. At the beginning of June, Chinese officials announced an immediate end to subsidies for new solar power projects and the elimination of all production incentives. The decision was generally seen as a shot in the arm to sector as it forces companies to produce efficiently and invest wisely. The reduction in state support has long been a prerequisite to lifting of anti-dumping tariffs in export markets.

Countries with most solar power production 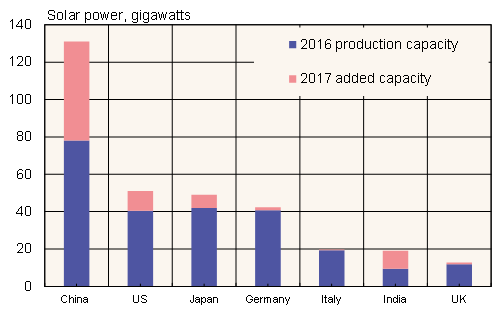