The yuan depreciation has also tightened tensions in trade policy talks. US president Donald Trump last week accused the Chinese of artificially devaluing their currency to support exports. China's foreign ministry says the drop is due to market factors, and China does not intend to devalue its currency to stimulate exports.

The exchange rate trend also reflects dollar strength and conditions on China's domestic market. The US Federal Reserve moves to higher interest rates, whereas China's monetary stance is becoming more accommodative to boost growth in the presence of market uncertainties.

Even so, officials seem to be refraining from intervening as they did after the mini-devaluation of the yuan in summer 2015. The State Administration of Foreign Exchange (SAFE) reports that pressure to move capital out of the country today is considerably lower than three years ago. China has a range of measures available if needed to prop up the yuan. 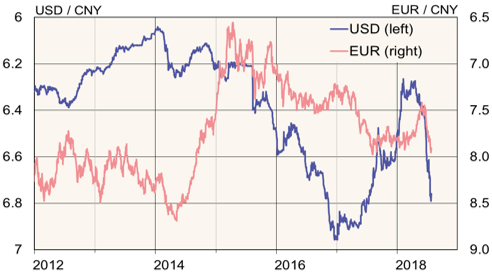