The finance ministry's government sector budget framework for 2019–21 foresees that rapid growth in revenues of the consolidated budget (federal and regional budgets, and state social funds) will continue still in 2019. Federal budget revenues are expected to rise substantially faster (about 15 % p.a.) this year and next compared to revenue streams to the other budget categories thanks to relatively high oil prices and a hike in the value-added tax. All oil tax revenues and VAT revenues will continue to go to the federal budget.

Revenue growth of regional budgets is expected to keep going at about 2 % faster than inflation. Part of this growth would come from letting regions retain gradually increasing shares of certain excise tax revenues. This dovetails with plans to start reducing transfers from the federal budget to regional budgets. Social fund revenue growth is also expected to outpace inflation, while federal transfers to the Pension Fund should remain roughly at current levels. Rates of social taxes going to the funds will generally stay unchanged, at a total of 30 % of workplace wages. The finance ministry notes some of the increase in government sector budget revenues will come from improved tax collection based e.g. on ongoing digitalisation. Collection of VAT, labour income taxes and social taxes has improved over the past couple of years.

The proposed framework assumes growth of about 2 % above inflation in government sector spending. Highest growth is seen in federal budget spending (excl. transfers to other budgets), but estimates of regional budgets do not yet include (at least fully) funding of the national projects listed in president Vladimir Putin's May inauguration Decree. This could lead to regional changes in taxation and budget transfers. Government sector wage increases are generally speaking outlined to match inflation.

Increases in social fund spending from next year onwards are expected only to roughly match inflation. Both the finance ministry and the labour and social affairs ministry say that the proposed gradual increase in the retirement age in a bill currently before the Duma could also produce budget savings to an extent that pensions for retirees who do not work could possibly be increased in coming years by an average of 6–7 % a year. 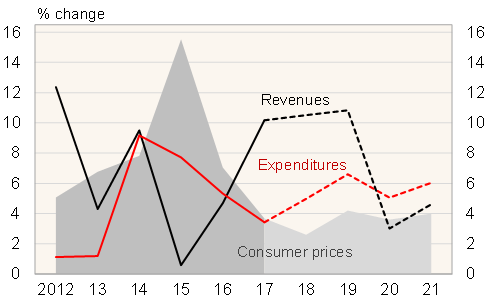