China has been the world's largest market for industrial robots since 2013, and accounted for 30 % of global industrial robot sales in 2016. The International Federation of Robotics (IFR) reports that China's share rises further in a couple of years to around 40 %. Robot density in China's industrial sector in 2016 (68 robots per 10,000 employees) nearly tripled in a few years' time to approach the global average of 74. The highest robot density in the world was in South Korea (631), while Russia, the Philippines and India (3 each) had the lowest robot densities. In 2016, a total of 87,000 new industrial robots were purchased in China, or more than double the number purchased in South Korea or Japan, the next largest markets. The annual number of units sold in China approaches the combined sales volume for North America, South America and Europe (97,300).

With over 30,000 units purchased in 2016, relatively more "service" robots are sold in North and South America than elsewhere. That same year, about 16,000 service robots were sold in Europe and 11,000 in Asia. Most service robots used in businesses are involved with logistics, national defence, hospitals or agriculture. Growth in the use of service robots by firms is expected to grow at 20–25 % a year in coming years. Private household robots are also included in the service robot category. Nearly 3 million domestic units were sold in Asia and the Americas in 2016, while sales in Europe were less than 1 million. Europe led in the number of service robot manufacturers (293), however, followed by North America (242) and Asia (134). 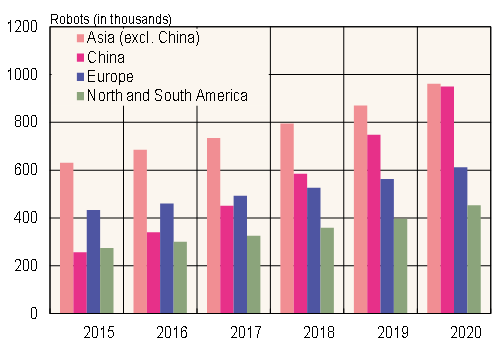