The value of goods exports in the first quarter slightly exceeded $100 billion, an increase of over 20 % y-o-y. Rising oil prices boosted exports, with the average price of Urals crude up about 25 % y-o-y. On the other hand, the total volume of exports of crude oil and oil products contracted by about 1 % y-o-y. In contrast, many other major goods saw brisk increases in export volumes, including natural gas, most metals and wheat. About half of goods exports went to EU countries, more than a fifth to Asia and about 9 % to countries in the Eurasian economic union. China accounted for 12 % of Russian exports, making it the top individual export market.

The value of goods imports in January-March was nearly $60 billion, an increase of about 20 % y-o-y. Highest growth among largest goods categories was recorded for imports of metals and machinery, equipment & transport vehicles. Import growth was supported mainly by higher import volumes and e.g. the number of car imports rose even by 50 % y-o-y. Food imports also rose briskly despite Russian import bans and efforts to encourage import substitution. In the category of dairy products, in particular, domestic producers have been unable to provide adequate supply. As a result, dairy import volumes climbed by 20 %. Nearly 40 % of Russian imports came from EU countries, over a third from Asia (from China 22 %) and 8 % from the Eurasian economic union. 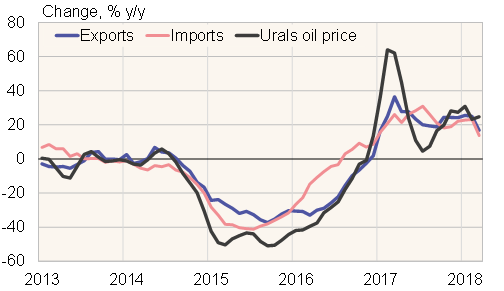