Production of the military-industrial complex (oboronno-promyshennyi kompleks or OPK) increased last year by over 3 %, reaching a record level after growing at 10−15 % a year in the four previous years. Over 80 % of production in OPK was production for defence, about the same share as in 2016. The share rose to this height in the boom of OPK defence production during 2012−2016. Civil production, however, is planned to gradually begin to account for a larger share of OPK after 2020 and rise to around 30 % by 2025. 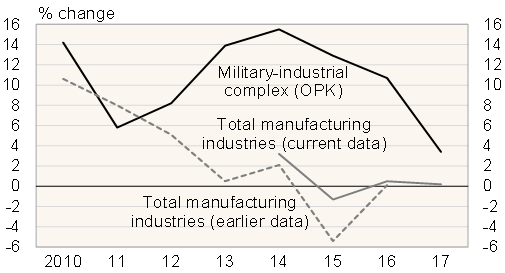