This year's $28 billion first-quarter current account deficit set a historical record for China. It partly reflects the typical dip in the first-quarter goods trade surplus and China's growing services trade deficit. In the first three months of this year, spending of Chinese tourists abroad increased by 14 % y-o-y to a record $74 billion. Tourist spending in China, in contrast, remained at the 1Q17 level and the travel services trade deficit was $64 billion. Overall, there was a record services trade deficit of $76 billion. The value of goods exports was up 11 % y-o-y and the value of imports was up by 21 %, narrowing the goods trade surplus to $53 billion. 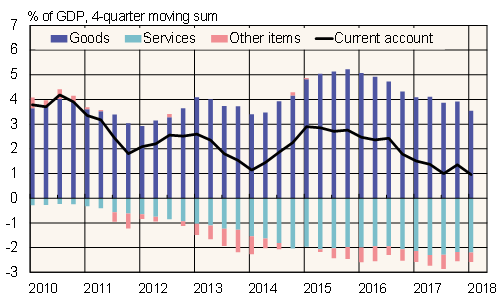