The Bank for International Settlements (BIS) reports that the total lending of foreign banks to Russia at the end of 2017 amounted to $122 billion. The figure includes lending of all foreign bank units to Russian borrowers. The lending stock has declined by a bit more than 50 % since the end of 2013, apparently on weak trends of the Russian economy and impacts of sanctions on long-term borrowing of certain companies. Lending recovered only slightly in 2017.

Among reporting countries, France was Russia's biggest lender ($27 billion), followed by Italy ($22 billion), Austria ($14 billion) and the US ($13 billion). All these countries have bank operations in Russia.

Foreign bank lending to many other emerging economies only fell slightly or even grew during the same period. For example, lending to India and Indonesia rose by nearly 20 % in the period. Foreign banks' lending to China fell by 7 % during the whole period, but last year it returned to brisk growth. 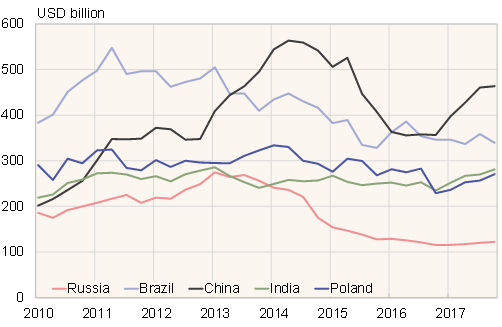