Measured in US dollars, the official currency for reporting the value of Russian foreign trade and balance-of-payments data, imports of goods and services rose by 20 % y-o-y in the first quarter. Measured in euros, however, spending on imports increased by only about 4 %, as the euro's exchange rate has appreciated against the dollar by an exceptional amount over the past year. Growth in goods imports was slightly lower than growth in services imports, which included growth of Russian travel spending abroad slowing down but still increasing by 14 % (in euro terms).

Russia's earnings on exports of goods and services rose by 20 % in dollars, but by only a few per cent in euros. At this pace, earnings rose from goods exports both overall and separately for energy and non-energy. For the past four quarters, the current account surplus was up to about 2.5 % of GDP.

After growing slightly in the second half of 2017, the net outflow of capital from the corporate sector abroad increased further in the first quarter. Apart from foreign direct investments into Russia, there were net capital outflows in all major foreign debt and receivable categories of the corporate sector. 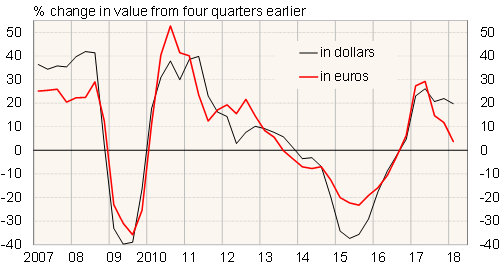