China's commerce ministry reports that outbound foreign direct investment from China (excluding the financial sector) fell by a third from 2016 to $120 billion. The commerce ministry figures also showed that inward FDI to China (excl. financial sector) amounted to $131 billion, a slight increase from 2016. Official balance-of-payments figures, which are based on different reporting, however, show outward FDI last year fell by over 50 %.

The drop in FDI outflows from China stems from the crackdown on capital exports that began in late 2016. Guidance published last August (BOFIT Weekly 35/2017) limits investment in branches such as real estate, hotels and entertainment. Another factor is the harsher scrutiny in approval processes for Chinese investment in target countries. As approvals drag on, some Chinese investors give up and go home.

China's official figures fail to give a comprehensive picture of the breakdown of foreign investment by country or by branch. For this reason, several organisations compile their own figures on Chinese investment. These figures, too, note a drop in investment of Chinese firms abroad, especially when ChemChina's massive $43 billion acquisition of the Swiss Syngenta late last year is not included. The investment decline is evident from the Heritage Foundation's China Global Investment Tracker (CGIT) dataset. It suggests that nearly all of last year's drop can be attributed to a decline in Chinese investment in the US. The value of Chinese FDI in the US fell by over 50 % last year compared to 2016. Setting aside the Syngenta deal, Chinese investment in Europe fell by over 10 %. With the Syngenta deal, FDI in Europe rose by 60 %.

The new guidelines give preference to investments under the umbrella of the Silk Road Project, aka the Belt & Road Initiative (BRI). The trade ministry notes that BRI-related investments in all 65 countries aboard in the Silk Road Project, remained at previous year's level in 2017. This is also evident from the CGIT dataset, where BRI investments remain at the $30 billion level of 2016. CGIT data show the largest BRI investments last year went to Singapore and India and that Chinese SOEs are largely responsible for investment. According to the Economist Intelligence Unit, some 50 state enterprises invested in over 1,700 BRI projects in 2014–17. 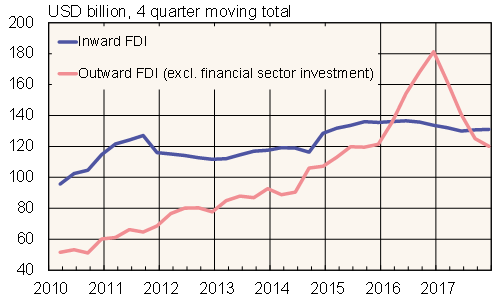