Regional 2017 GDP growth figures for China's provinces range from a decline of 14 % in Inner Mongolia to a rise of nearly 16 % in Shanxi province. In addition to Inner Mongolia (which was revealed to fake its statistics), weakest growth provinces included north-eastern province of Heilongjiang, which is characterized by the agrarian economic structure and low annual household incomes, as well as China's second-least-populous province Qinghai, which is dependent on heavy industry and oil & gas production. Most provinces, however, saw GDP growth above the national average (6.9 %). Highest growth was posted in central provinces. Resource rich Shanxi and Guizhou, industrial Anhui and Shaanxi all saw annual GDP growth above 14 %.

Chinese provincial data should be viewed with some scepticism. Statistical malfeasance has continued to come to light in recent months (BOFIT Weekly 3/2018), indicating that regional administrations are still fudging numbers to meet their hard growth targets. Reported regional GDP in aggregate has typically exceeded the National Bureau of Statistics national GDP figure. However, some regional governments recently lowered their growth targets for 2018. Even if most GDP adjustments are marginal, some are considerable. The port city of Tianjin east of Beijing, for example, conceded it manipulated its data and then lowered its growth target from last year's 8 % to 5 % in 2018. 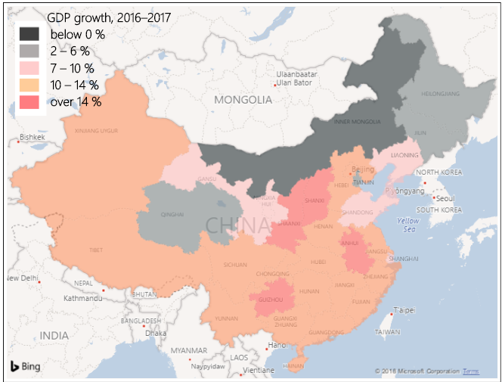