The US Federal Reserve (Fed) raised its main reference rates last week by 25 basis points to a target level of 1.25–1.50 %. The People's Bank of China (PBoC) followed by raising its reverse repo rates, i.e. the rates it uses to signal the monetary policy stance, by 5 basis points. The 7-day reverse repo rate climbed to 2.5 %. On the interbank market, there was no indication of higher repo rates, however, and short-term SHIBOR rates remained in the range of 2.7–2.8 %. Reverse repo operations are mainly used to cover the regular liquidity needs of banks. Looking at the PBoC's short-term and medium-term lending facilities (SLF and MLF) to banks, at least the one-year MLF rate was raised by 5 basis points.

The PBoC last raised rates in March just after the Fed raised rates. However, the PBoC did not follow the Fed in June to raise rates. China's exceptionally cautious interest-rate policy reflects the difficult choices confronting monetary policymakers at the moment. On one hand, China needs to hold rates sufficiently higher than US rates to prevent pressures on capital flight and weakening of the yuan. A tighter monetary stance with higher rates would also help calm the growth in indebtedness. The actual rise in market rates already reflects these concerns. On the other hand, policymakers face pressure to meet tough official economic growth targets. A rate increase may also be a cause of concern from financial stability point of view by further impeding loan repayments and limiting the access to credit of firms already struggling with solvency issues. A modest inflation rate of just under 2 % and a stable inflation outlook provides a modicum of relief to the challenges facing policymakers.

It is difficult to give a clear appraisal of Chinese monetary policy due to its multiple goals and shifting monetary policy framework. In order to bring clarity and to emphasise the increasing role of interest rate policy the PBoC is, however, moving to implementation of an interest rate corridor which aims to set the upper and lower limits to short-term interbank rates. The reverse repo rate forms the lower bound while the upper bound is based on lending-facility rates. 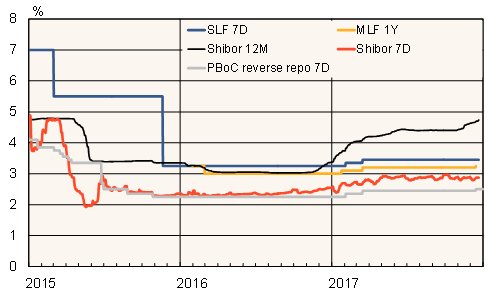