Manufacturing output suffered a particularly large drop, to a level nearly 5 % lower than in November 2016. Part of this drop was due to a high point of that reference period. Compared to the 2014 average, November manufacturing output was down about 3 %. Much of the weak performance in recent months has focused on a few branches. The slump in metal industry output has dragged down manufacturing overall. In November especially, the decline was also driven in part by the negative impacts from certain branches producing machinery & equipment.

Output of mineral extractive industries (including gas & oil) shrank in November for the fifth month in a row, and was clearly lower than twelve months earlier. As was the case in September and October, the reason was lower crude oil production. The overall reduction in industrial output in November was also due in part to a reduction in electricity production due to mild weather. Construction posted another slight decline.

Retail sales provided November's bright spot. Retail volumes have gradually recovered all this year. November retail sales were up 2.7 % y-o-y, and over 3 % in September and October. Sales were largely boosted by the increased reliance of households on bank credit. Real household disposable incomes, in contrast, continued to perform weakly in November – even if real wages have risen substantially since the beginning of the year. Some commenters in Russia have estimated that the rise in statistically recorded wages could largely reflect successes of efforts by tax authorities to bring under-the-table wage payments into the sphere of taxed income. 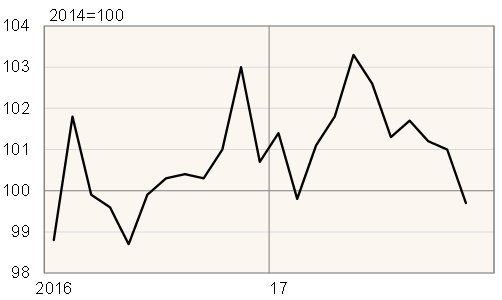