China remains heavily dependent on coal. The IEA's latest World Energy Outlook reports that coal accounted for 73 % of domestic energy production in 2016 and 65 % of energy consumption (production and imports). With its current production and consumption structure, China accounts for half of global coal demand, even if it only accounts for roughly a quarter of total global energy demand. Air-pollution problems caused by coal largely drive China's efforts to reduce coal use.

The IEA expects Chinese energy demand to increase by 21 % between 2016 and 2030 if existing plans move forward and announced intentions are fulfilled. Growth is clearly lower than in the 2000–16 period, when demand rose by 180 %. The IEA forecast sees energy demand rising as much as 31 % without effective reforms. Sustainable development would require demand to grow by just 5 %. The report predicts that China's own energy production will increase by just 17 % by 2030, which means the country becomes more dependent on energy imports and remains the world's largest net importer of energy. China's self-sufficiency in oil and natural gas is low and further increases in demand lower China's energy self-sufficiency overall. By 2030, the IEA expects more energy demand to be covered by natural gas (10 %), various forms of renewable energy (13 %) and nuclear energy (6 %). Coal-based production, however, will still satisfy 52 % of energy demand.

Structural reforms of the energy sector require considerable investment, which IEA estimates to reach 200 billion dollars a year by 2025. On top of that, most currently operating coal-fired plants are fairly new (70 % of coal capacity consists of plants commissioned in 2005 or later) and taking them off-stream might mean abandoning of otherwise usable power infrastructure worth roughly 90 billion dollars by 2030. 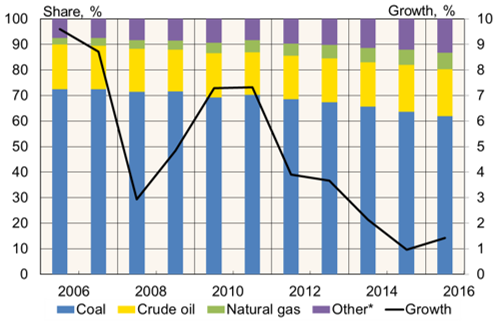