While Russia's economic problems in recent years have reduced direct investment, the impacts have generally been limited. Most Russian FDI flows are, however, Russian capital that has been recycled through e.g. Cyprus or the Bahamas and invested back into Russia. The reasons for this recycling include e.g. Russia's own institutional weaknesses and a quest for more favourable tax treatment. The government has tried in recent years to diminish capital recycling and make Russian firms to repatriate their operations.

There are many challenges in compiling FDI figures in general and individual corporate acquisitions can cause huge swings in investment numbers over the short run. For example, at the end of 2016, there was a massive spike in Singaporean FDI flows into Russia after the sale of a stake in Rosneft to a Singapore-registered joint venture of the Qatar Investment Fund and the Swiss Glencore. On the other hand, this year the equity FDI flow from Russia to Singapore jumped.

Net flows of foreign direct investment to and from Russia 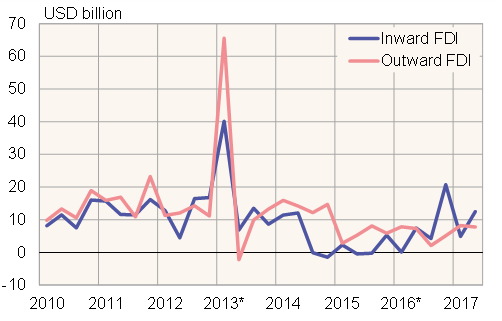