Finnish Customs reports the goods trade between Finland and China grew by 20 % y-o-y in the first half of this year. Growth exceeded that of Finnish foreign trade overall (up 15 %). Finland's imports from China swelled by 13 %, in line with overall import growth of 14 %. Exports to China rose by 31 % from the previous year (total exports up 15 %). Finland's trade deficit with China contracted in the first six months of the year to 470 million euros (630 million euros in 1H16). Trade with Hong Kong also grew by about 20 %.

Statistics Finland reports that trade in services between Finland and China rose by 17 % y-o-y in 1Q17 (exports up 16 %, imports 19 %). The value of services exports last year reached 1.1 billion euros, or about 30 % of Finland's total China exports. In this year's first quarter the share dropped to less than 25 %.

Statistics Finland reports that the number of Chinese travellers spending at least one night in Finland increased by about 50 % y-o-y in the first half. The Chinese accounted for 5 % of all overnight stays of foreign visitors to Finland. 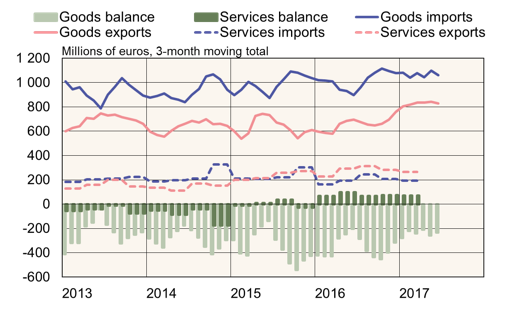