Manufacturingoutput overall showed a small rise in the first half of the year, but the differences across branches were large. In the important food and chemicals industries, production growth remained brisk. In contrast, growth in production of petroleum products remained rather sluggish, while the decline in metal production became more severe. After about three years of weak performance, production growth was seen in both the machinery and equipment categories and the car industry.

While manufacturing as a total has performed poorly in recent years, big structural changes have taken place in manufacturing. Among the large manufacturing branches, food and chemicals each grew by roughly one fifth from the first half of 2013. Production of oil products after 2014 has increased really slowly and metals output has hardly risen. Largely due to drops in investment, production, maintenance and repair of machinery & equipment have contracted quite steeply, as well as construction materials.

Real output change in Russian manufacturing branches from 2013 to 2017 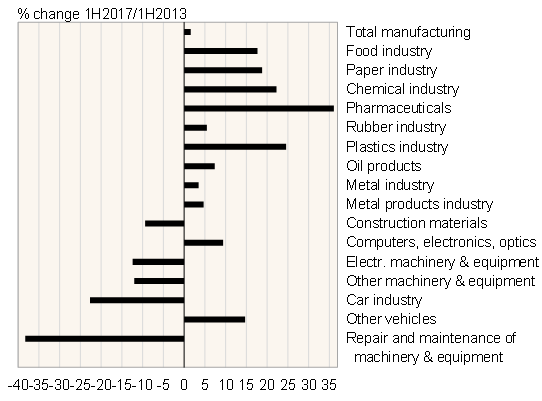