National Bureau of Statistics figures show that on-year GDP growth accelerated to 6.9 % in the first quarter, but several indicators last month suggested again a slowdown in on-year growth. For example, industrial output growth fell to 6.5 % in April, due in part to 3 % y-o-y drop in passenger car production. For the first four months of the year, car production was still up nearly 5 % compared to the same period in 2016. Despite a slight slowdown from March, retail sales volumes were still up nearly 10 % y-o-y in April.

The growth in urban fixed asset investment (FAI) is a significant monthly demand-side item, as it should reflect the capital formation component of GDP growth. Nominal 12-month growth in the value of urban FAI slowed in April on sharply lower growth in private investment. If a cautious rise in prices of investment goods is assumed, real growth of FAI was only about 4 % y-o-y. Moreover, realised on-year growth in investment in January-April slowed from over 12 % in 2016 to below 5 % in 2017.

Because capital formation still has larger weighting than private consumption in total demand, it is harder for private consumption to take up the slack in GDP growth when investment growth slows. Moreover, the trend in disposable incomes gives no indication of further acceleration in the already rapid rise in household consumption demand. Foreign trade (net exports) presently plays a minor role in the Chinese GDP trend. The volume of goods imports also increased faster than exports in the first quarter. 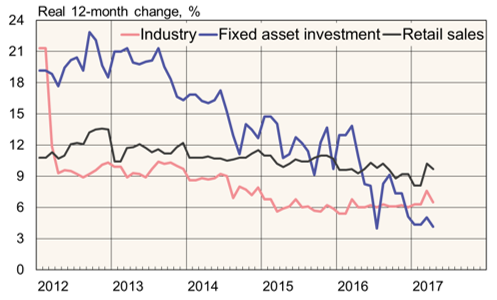