China's National Bureau of Statistics reports that the rapid rise in housing prices is only under control in a couple of China's largest cities. The rise in prices is broad based, although the climb in prices outside big cities has been much less. The NBS reports apartment price trends in 70 cities. The February reading showed prices were up over the past 12 months in 60 cities, and down in 10 cities. Smaller cities and towns have not experienced the same real estate boom and often suffer a glut of unsold apartments. Tracking prices in real estate markets is complicated by the fact that the information on certain private actors has been unavailable this year.

Efforts to curb speculative trading, and thus an excessive rise in apartment prices, have been strongest in large cities (BOFIT Weekly 44/2016). The introduction of a property tax that would increase the cost of apartment ownership and reduce speculative investment has been planned for years. Such a tax would increase revenues to local governments currently reliant on sale of land use rights. Postponement of the tax appears likely, however.

The rise in apartment prices has fuelled a renewed boom in apartment construction. New housing starts, measured in terms of liveable floorspace, increased 9 % y-o-y last year and 15 % in January-February. Measured in floorspace, the volume of completed apartment buildings increased by 15 % y‑o‑y in January-February. Housing construction was still in decline in 2015. The volume of apartment sales rose by 22 % last year and growth has remained strong this year.

The bursting of the Chinese real estate bubble could have profound effects on financial markets. Moody's recently warned that the exposure of banks to real estate risk has increased. The stock of housing loans increased last year by 35 % and corresponded to 26 % of GDP. In addition, many large developers are heavily indebted. 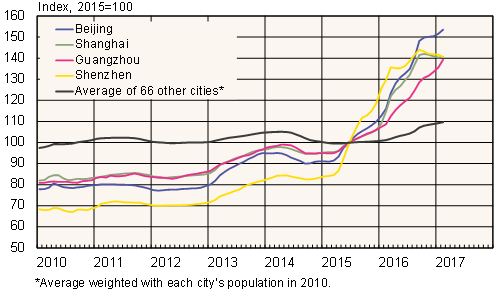