The PBoC reports that January issues of total social financing (TSF), a broad measure of the credit supply, broke all historical records last month. Especially financing provided by the shadow banking sector soared (i.e. bankers' acceptances, trust loans and entrusted loans). January is typically a big month for new lending in China. The stock of TSF lending in January was up about 13 % y-o-y.

The Bank of International Settlements (BIS) estimated that the total debt held by Chinese firms, households and the public sector equalled 255 % of GDP in June 2016. In other words, China has much more debt than in other emerging countries. China's piling debt is considered as a huge risk to both the country itself and the global economy. Most of the other countries that have experienced similar high debt growth have then seen rapid decelerations in economic growth. In many countries, it has also led to banking crises. China's debt is almost entirely domestic, which alleviates foreign exchange risk from the debt.

China has only taken minor measures to slow the pace of rising indebtedness. Its economic policy has been geared to sustain high GDP growth and assuring that China's goal of doubling GDP between 2010 and 2020 is not threatened. The monetary policy stance remains loose, even if the PBoC raised rates slightly in January-February on its lending to the financial sector. At the same time, however, it also boosted liquidity on the market by other means, especially ahead of the New Year's holiday week. The central bank last week announced targeted relaxation of bank reserve requirements. Banks that lent extensively to small businesses and agriculture last year will be entitled to lower reserve requirements (15–16 %) from the end of February. Similar targeted incentives have been used before and banks that fail to keep with the policy track lose their eligibility for the lower reserve requirement. The usual reserve requirement is 16.5 % at present. 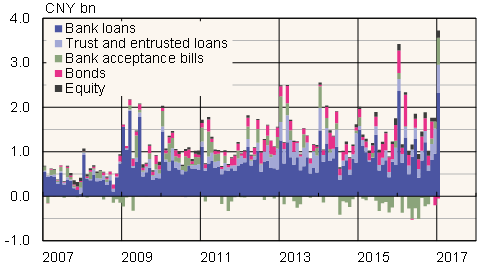