Fourth-quarter goods imports were up 9 % y-o-y in value terms. Growth was seen in all largest product categories, with highest growth posted for imports of machinery, equipment & transport vehicles. Import growth should continue this year on gradually reviving demand and a stronger ruble. The ruble's real effective (trade-weighted) exchange rate was up 34 % y-o-y in January from its low in the first months of last year.

The value of goods exports rose in the fourth quarter by 2 % y-o-y, due largely to higher commodity prices. The volume of crude oil exports remained unchanged from a year ago, while exports of oil products fell substantially. Natural gas exports continued to rise. The volumes of oil & gas exports are expected to rise only slightly this year. Among other goods, brisk growth continued e.g. in the exports of sawn timber. President Putin recently ordered the government to examine if there is a need to impose duties or quotas on exports of sawn timber.

The value of goods imports in 2016 contracted by less than 1 % to about $190 billion. About half of goods import consisted of machinery, equipment & transport vehicles. Chemicals and foodstuffs were also important goods categories. The value of goods exports was $280 billion, nearly 20 % less than in 2015. The sharp decline in oil prices also reduced the share of oil and natural gas in exports (just 60 % in 2016). Correspondingly, the shares of other goods categories in exports increased slightly, even if the value of their exports also fell.

The EU was still Russia's most important trading partner last year, accounting for nearly half of exports and almost 40 % of imports. 22 % of exports went to countries in Asia, and 34 % of imports came from Asia (China's shares were 10 % and 21 %, respectively). CIS countries accounted for roughly 10 % of Russia's imports and exports.

Structure of Russian goods trade in 2016 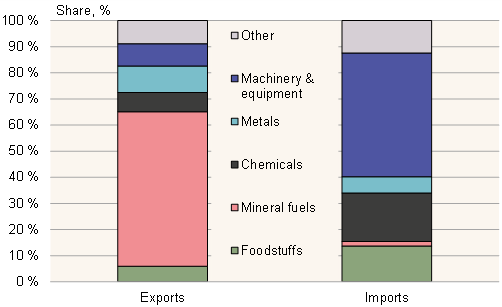