Early this month, Bloomberg News reported that China's deputy prime minister Zhang Gaolin was pushing statistics officials to ensure reliable reporting. For sure, there are good reasons for this as the reliability of official statistics is an issue that has been surfacing repeatedly for a long time. Last time matters came to a head in January with widely reported revelations about a massive, multi-year manipulation of official statistics in the Liaoning province.

Looking at economic growth figures over the past two years, eerily unwavering growth performances catches one's eye. For example, on-year GDP growth figures last year were reported as 6.7 % p.a. in each of the first three quarters of the year, and 6.8 % in the fourth quarter. In 2015, reported GDP growth was 6.9 % just about as stable as last year. Given that the Chinese economy is undergoing a massive readjustment, such stable growth figures are dubious.

In the same vein, reported industrial output figures show remarkably steady growth in 2015–2016 (see chart). Other indicators of industrial activity give quite different assessments. For example, both the official and private purchasing manager indices for manufacturing (PMI and Markit PMI) suggest growth came to a halt and began to fall in early 2015. Strict interpretation of the weak PMI index trends suggests that 12-month industrial output growth had fallen to around zero or even below it by the start of 2016. This dreary view is backed by industrial electrical power consumption figures. The inference of a substantial slowdown in the growth of electricity consumption holds even if figures for troubled heavy industry is not included in the industrial electrical power consumption figures. Interestingly, an indicator made from satellite images further support the notion there was a severe slowdown in industrial output growth.

Looking at recent growth figures and forecasts, the notion that they merely reflect official growth targets rather than actual economic dynamics does not seem far-fetched. In any case, rigid growth targets no longer serve the needs of responsible economic policy in present-day China. Moreover, their elimination would remove the incentive to fabricate numbers. 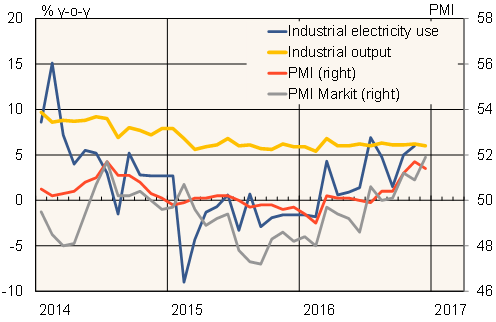