The collapse of prices of imported commodities in 2014 produced rapid growth in China's foreign trade surplus. The growth ended last year and the surplus began to shrink. The surplus for the entire year fell to $510 billion. The drop in the surplus also reflected slightly smaller trade surpluses with Europe ($135 billion) and the US ($254 billion). China's yuan lost 6 % of its value last year against the dollar and 4 % against the euro. Even so, the depreciation does not appear to have conferred much competitive advantage on China – at least not in terms of higher trade surpluses. 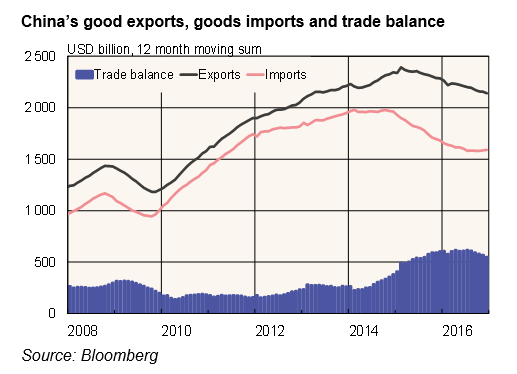 A notable trend in imports was the soaring volume of major commodities last year. Imports of paper pulp rose 7 %, iron ore 8 % and copper 5 %. Crude oil imports were up 16 % to nearly 390 million tons. The increase in oil imports reflect continuing fast economic growth and lower domestic production, which was down about 6 % y-o-y for the first eleven months of 2016. In addition, China's efforts to fill its strategic oil reserves still seem to be driving crude oil demand in China.

Changes in China reflect adjustments in global production chains. Chinese figures show that the share of the processing trade of total trade continued to fall a couple of percentage points last year with respect to both imports (down to 31 %) and exports (down to 38 %).