At the end of last year, China's main stock indices were down about 10 % y-o-y. This reflects the crash in share prices in January 2016 induced partly from the failed introduction of an automatic circuit breaker mechanism to interrupt trading. The mechanism was decommissioned after four days of chaos. After January, China's main share indices rose over 15 %. Chinese stock exchanges this year have seen a much calmer start.

The market capitalisation of the Shanghai stock exchange at the end of 2016 was about $4.1 trillion (40 % of GDP), while the market cap of the Shenzhen exchange was $3.2 trillion (30 % of GDP). In terms of market capitalisation, they were the fourth-and fifth-largest exchanges in the world after the New York Stock Exchange, NASDAQ, and the Tokyo Stock Exchange. Although share trading volumes today are less than half their 2015 peak, the Shanghai exchange is still second after the NYSE, and Shenzhen is number four directly after the NASDAQ in trading volume. At the peak of the 2015 stock craze, the Shanghai and Shenzhen exchanges were the world's largest in terms of trading volume.

IPOs have accelerated in recent months. Last year, a total of more than 200 new listings took place on the Shanghai and Shenzhen exchanges, with several hundred firms still awaiting listing dates. Since summer 2015, when the stock market slide began, IPOs have often been postponed for months. Reform of the listing process and moving to a registration basis have long been under preparation. 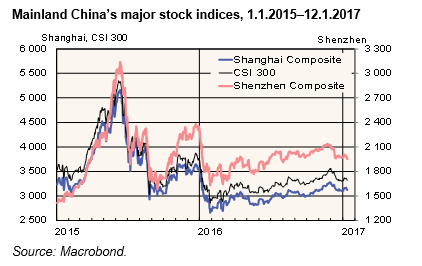