SouFun, a private real estate portal that tracks apartment prices in China, reports that apartment prices in its survey of 99 Chinese cities showed an average 12-month increase of 19 % in November. The rise in apartment prices in big cities has become more broad-based: 87 of the 99 cities surveyed showed price increases over the past twelve months. Housing market trends vary considerably across provinces, however. Price increases have been greatest in China’s major cities largely due to investors piling into these markets.

The rise in prices moderated from October to November in large cities, which could be a harbinger of the end to this period of soaring prices. The National Bureau of Statistics reports that average apartment prices in some major metropolises (including Beijing, Shanghai and Shenzhen) in mid-November were at slightly lower levels than in October. Prices in these cities are still almost 30 % higher than they were a year ago. Rising real estate prices are considered a major risk to China’s economic stability, and the local and central governments have tried to curb price growth in many ways.

Growth in real estate sales slowed in November. Measured by floorspace, apartment sales increased 8 % y-o-y. Apartment sales were still rising an average pace of 30 % y-o-y in the first half of this year. Growth in apartment construction has also slowed from the first half of the year. Measured by floorspace, the volume of completed apartments rose 6 % y-o-y in the first eleven months of the year and new construction starts were up 8 %. The volume of apartments for sale measured in floorspace fell on-year in January-November. 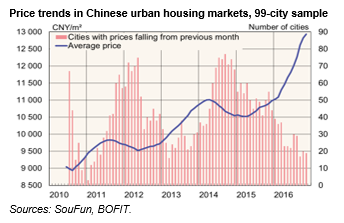