Russian president Vladimir Putin made a two-day visit to Japan last week that included the familiar signings of memoranda of understanding and framework agreements. Putin and Japan’s prime minister Shinzo Abe also discussed the long-running territorial dispute over the Kuril Islands. While little progress was made towards resolution of the dispute, the leaders produced a joint communique stating a common pursuit to develop economic cooperation on the islands.

Russia and Japan are not each other’s key economic partners. In Asia, China is the most important economic partner for both of them. Thus, the interest in developing mutual economic relations partly reflects efforts at counterbalancing China’s increasing economic power in the region. Japan currently participates in the economic sanctions regime Western countries have imposed on Russia, but Russia’s countersanctions on food imports do not apply to Japan. In any case, Japan exports very little food.

In recent years, Japan has accounted for about 4 % of Russian goods trade, while Russia has accounted for a slightly smaller share of Japan’s goods trade. The value of Russia-Japan bilateral trade has contracted sharply in recent years due to falling oil prices, ruble depreciation and Russia’s weak economy. Russia mainly exports oil & gas to Japan and imports cars. Japan last year accounted for about 6 % of Russia’s oil & gas exports. Russia currently has one natural gas liquefaction facility on the Sakhalin island. Most of its LNG goes to Japan, and Japanese firms are minority participants in the venture. Japanese carmakers also assemble cars in Russia. For example, Nissan is part-owner of Avtovaz, Russia’s largest car manufacturer. 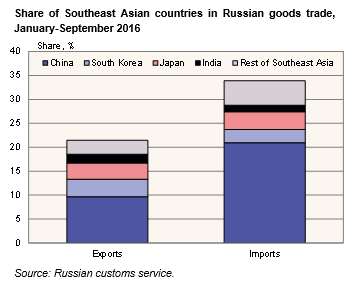