Last week saw the release of a review on Finnish exports to China. The review was prepared in cooperation with Business Finland, Finland’s ministry of economic affairs and employment, Finland’s ministry of foreign affairs and BOFIT. China has emerged over the past two decades to be one of Finland’s most important export markets. Even so, Finnish exports have not been able to keep up with rapid growth of Chinese demand. Measured in foreign value-added consumed by China, Finland has lost a larger share of the Chinese market than any of the other 65 countries tracked in the OECD trade in value-added statistics. At the same time, Finnish exports have remained concentrated in the hands of the few businesses that account for the lion’s share of exports to China.

The structure of Finnish exports to China has also changed dramatically. The export portfolio has shifted from machinery & equipment to raw materials and intermediate products. In countries like Sweden, Denmark or Austria, the share of commodities and intermediate products has fallen in their exports to China. Part of the major change in the structure of Finnish exports is due to the fact that Finnish firms have shifted much of their machinery & equipment manufacturing activity to China. Statistics Finland reports that about 250 Finnish subsidiaries operate in China with combined net sales of 13 billion euros in 2021. In terms of net sales, about 80 % of subsidiaries operate in the fields of machinery, metals, electronics and the electrical industry. Statistics Sweden reports that the share of the subsidiaries of Swedish firms operating in China in these fields is 55 %, while the total net sales of Swedish subsidiaries in China amounted to about 20 billion euros last year.

As part of the review, a survey was conducted in summer 2022 to the largest Finnish exporters to China. Those firms reported that over the past ten years China business operations have also led to increased manufacturing, investment, R&D activity and personnel hiring in Finland. Respondents noted, however, that China’s business environment has become more challenging and the outlook is gradually becoming less rosy. Companies were most concerned about China’s zero-covid policies, geopolitical tensions, increased regulation, unfair competition and favouring of Chinese production. A recent Team Finland business survey of Finnish firms in China, conducted between late October and early November, had similar findings.

Value of Finnish goods exports to China has grown modestly while goods imports have soared. 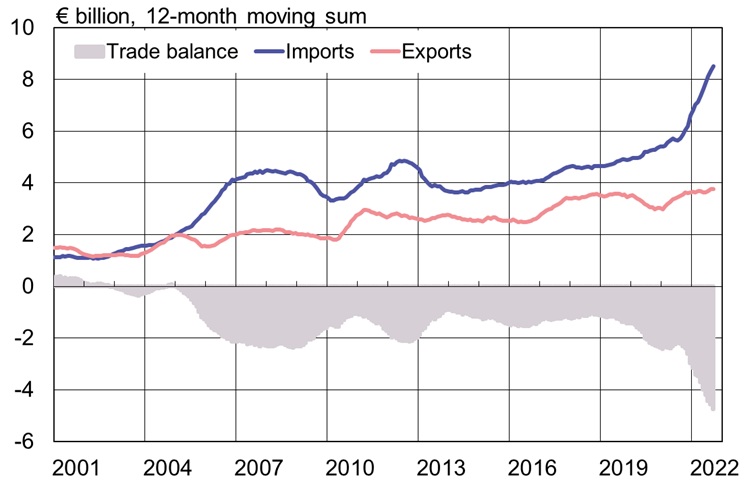