The latest government measures directed at the real estate sector seek to assure that construction projects in progress get finished and encourage consumers to buy apartments. Extensive operations to bail out developers are not contemplated. Several provinces and municipalities have eased apartment purchase requirements by e.g. dropping purchase restrictions and reducing the required minimum downpayment amount. The central bank has allowed lower interest rates for first-time apartment buyers. Starting this month, tax breaks on profits from the sale of an existing apartment will be allowed for individuals that purchase a new apartment in the same city.

A number of construction projects have been suspended due to the financial troubles of developers. It is common in China to purchase a new apartment before construction has started. Investors in some provinces and municipalities became nervous last summer about the slow progress of projects, and threatened to stop making mortgage payments until building activity restarted. Such payment boycotts have continued in autumn.

China’s policy banks (Agricultural Development Bank of China, China Development Bank and China Exim Bank), in particular, are tasked with financing investment projects. The government announced in June that policy banks should increase their lending to infrastructure projects by 800 billion yuan (BOFIT Weekly 22/2022). Later last summer, the government added another 600 billion yuan in total to the lending pool. The proposed 1.4 trillion yuan (200 billion euros) lending pool corresponds to 1.2 % of Chinese GDP. According to media reports, policy banks have been ordered to earmark 200 billion yuan for struggling developers to enable them finalise housing that is already sold but not yet completed. The government will also provide interest support for these loans.

To encourage provincial-level infrastructure investment, the central government in recent years has permitted provincial governments to finance infrastructure projects with off-budget “special purpose bonds.” The key selling-point of such bonds is that they theoretically pay for themselves with the profits from the investment. As most of the allotment for new special-purpose bonds this year has already been used, the government announced in late August that unused special bond quota from previous years will be tapped to allow provinces to issue another 500 billion yuan in total during the remaining of the year. The allowed uses for special-purpose bonds have been expanded in recent years, and today they can be used to finance a wide variety of projects. The biggest problem is usually finding profitable projects in which to invest.

Commercial banks have also been encouraged to increase their lending to developers. In late September, Bloomberg reported that the People’s Bank of China and the China Banking and Insurance Regulatory Commission (CBIRC) have ordered the country’s six largest state-owned banks to increase their real estate financing by 100 billion yuan each by the end of this year. The increase applies to housing loans, loans to developers and developer bonds. In August, the government ordered China Bond Insurance to insure new bonds issued by approved developers. Developers, in turn, must put up their assets as collateral for the insurance guarantee. In addition to the state financing programmes, many provinces have established their own crisis funds.

The financial problems of developers are unlikely to ease as the housing market cools and problems spread to other firms. Private developers are experiencing the most distress and the government’s role in the real estate sector is increasing as state-owned enterprises and provincial governments come to the rescue of insolvent firms. Government measures have so far failed to revive apartment sales, so their impacts on the real economy are likely to remain small. 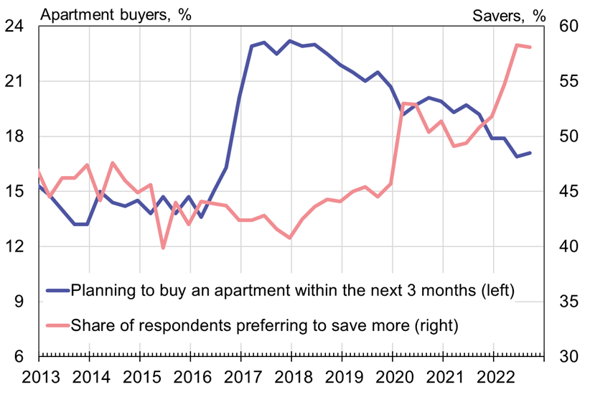