Western sanctions on Russia, combined with the voluntary decisions by international corporations to exit the Russian market and difficulties such as financing foreign trade transactions have caused Russia’s imports to collapse in recent months. Russian Customs has ceased to publish foreign trade figures, so the changes in Russian imports must be deduced from the export data of Russia’s trading partners.

The statistical data of Russia’s trading partners reveal that exports to Russia (i.e. Russia’s imports) plunged in the months after the invasion of Ukraine. Notably, exports to Russia also declined among countries not sanctioning Russia, including China and Vietnam. Taiwan and South Korea, major suppliers of semiconductors, have seen a dramatic drop in their exports to Russia that has also caused production problems in Russia. In particular, Russian industries that rely heavily on imported components (e.g. car and home appliance manufacturers) have been struggling.

The value of Russian exports rose throughout the spring. Crude oil prices have remained relatively high, even if the difference between the price of Russian Urals blend and North Sea Brent has widened to 20‒30 dollars a barrel. Russia has succeeded to some extent in redirecting its EU oil exports to countries in Asia. India, in particular, has increased its purchases of Russian oil.

Exports to Russia have also collapsed for many of its key Asian trading partners, even those not participating in sanctions (export values in US dollars, December 2021 = 100) 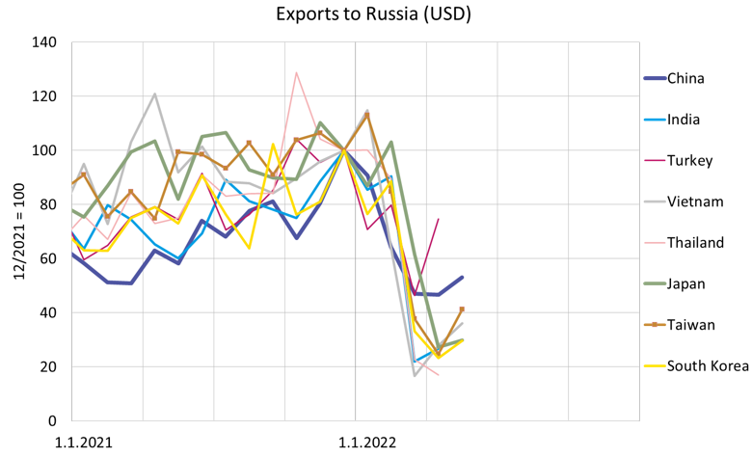