May federal budget revenues were up by just 10 % y-o-y in nominal terms. The rise was gravely insufficient to keep pace with inflation, which has increasingly chewed away at the purchasing power of budget revenues and spending. The inflation that is relevant for the government purchasing power is proxied mainly by consumer prices and industrial producer prices on domestic deliveries (they were up on the average by about 24 % in May). In the first four months of this year, nominal budget revenue growth was still 34 % y-o-y.

The rise in oil & gas tax revenues subsided to around 40 % y-o-y in May after spiking in previous months. Nearly all of the government’s oil & gas tax income is defined in US dollars, so the May slowdown can be largely tied to the fact that the discount price of Urals blend in April was a moderate 13 % higher than a year earlier and the ruble’s exchange rate was just a couple of percent lower than a year earlier.

Nominal decrease of non-oil revenue streams to the federal budget eased notably. For the January-May period, they were up by just 3 % y-o-y. Collections of value-added tax revenues, which all go to the federal budget, were strong in May. However, they were insufficient to lift the VAT revenue by more than 7 % y-o-y for the first five months of this year. Other federal revenue streams shrank by 2 % y-o-y in January-May.

After rising in March and April, federal budget spending fell in May from 12 months earlier, partly a reflection of the rather high base level of May 2021. Nominal spending during January-May this year was nearly 20 % higher than in the same period in 2021. Russia has ceased to publish data on any spending categories. The cumulative budget surplus for the last 12 months was slightly over 1 % of GDP in May.

The May drop in budget expenditures is likely to be transitory as this year is seeing supplemental budget spending. While no specific figures have been released on the overall amount of supplemental spending, approved additional federal budget spending this year should equal at least 3 % of GDP. Statements and media releases from the cabinet and finance ministry indicate total supplementary budget spending should amount to several percent of GDP. The extra spending includes inflation adjustments for pensions, increased social support for families with children, as well as many smaller allocations to various sectors of the economy and infrastructure. In addition, assets from the National Welfare Fund have been earmarked for recapitalising a few banks and corporates. The ceiling on credit guarantees of state development bank VEB has been increased considerably this year. Companies have also been granted the possibility of postponing this year’s scheduled social tax payments until next year.

The real stimulus impact sought by supplementary budget measures is bitten by inflation. The information on the amounts of decided and planned spending increases so far this year, as well as the amount of postponed tax payments, suggests the issue is valid indeed. Placing the amounts in the context and scale of the entire government budget sector (consolidated budget), it appears inflation will this year erode most or nearly all of the nominal incremental sum that is composed of spending increases coming from earlier spending estimates as well as supplementary spending and postponed tax payments.

Nominal increases in revenues to Russia’s federal budget have slowed to much below inflation. 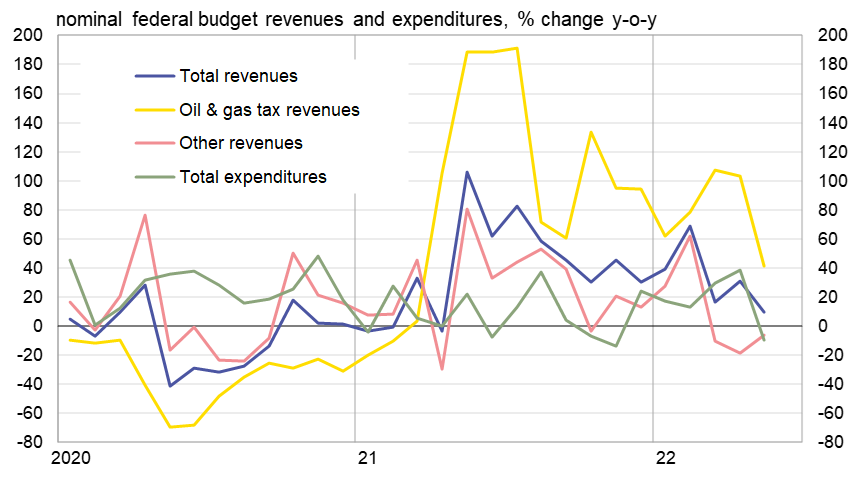