The American Chamber of Commerce in China (AmCham) earlier this month released its 24th annual survey of American firms operating in China. The survey, based on responses collected in November 2021 from 353 member American firms operating in China, finds that respondent firms were experiencing improved business conditions at the end of the second year of the pandemic slog, but were more concerned than earlier about the outlook for Chinese economic growth, particularly over the near term.

Fewer firms (37 %) than last year believed that China’s investment environment was improving. In AmCham’s two previous surveys, half of responding firms said that the investment environment was improving. The shifts in the political climate and increased harshness of the regulatory environment were given as the biggest reasons for increased uncertainty. As in the 2021 survey, firms mentioned increased tensions between China and the United States as the top challenge to their operations. For the first time, US-China and geopolitical tensions also made it into the top-three human capital challenges. The surveyed companies reported that for example competent Chinese workers willing to work for an American employer have become increasingly scarce.

The number of firms that feel less welcome in China doubled from last year’s survey. While the unease has been broad-based across sectors, the largest concerns came from the technology sector. Despite this, two-thirds of respondents said they still plan to increase their investments in China during 2022 and half of responding firms said they hoped to increase staffing. As in the previous two years, most firms (83 %) said they had no plans to move their China operations to another country. 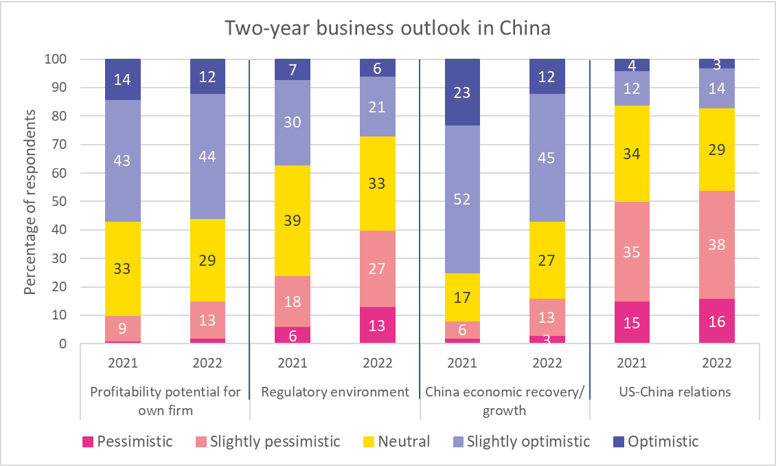