Huarong is one of four state-run asset management companies created in the wake of the Asian financial crisis in 1999 to deal with the wave of non-performing loans swamping China’s state-owned banks. With money granted by the government, Huarong acquired the non-performing loans of ICBC. As asset management firms were later allowed to expand into other areas, Huarong began to offer a selection of financial services and listed on the Hong Kong stock exchange in 2015.

The company fell into deep troubles after years of debt-driven expansion and unprofitable investments. Huarong’s total debt obligations are unclear, as it has numerous subsidiaries and little available information on their ownership structures or financing arrangements. Huarong executives purportedly were involved in vast corruption. Huarong’s former CEO Lai Xiaomin, received a death sentence for taking bribes and was executed in January last year. The company cut back on its other businesses after regulators demanded in 2018 that state-owned “bad banks” focus on their core mission of financial clean-up.

The latest problems emerged in April, when the company missed the date for submitting its 2020 financial statements. Trading in Huarong shares were suspended, bond prices dropped and issuances of new foreign debt ceased. In August, Huarong announced a restructuring programme that would involve state-backed strategic investors, in particular the Citic Group. Huarong proposed to sell ownership stakes and units in its subsidiaries. Huarong ultimately revealed that its 2020 losses amounted to 103 billion yuan ($16 billion) and that its capital adequacy ratio stood at 6.3 % at the end of June 2021, well below the required minimum of 12.5 %. The company claims it debt problems are due to the unchecked expansion of the Lai Xiaomin era.

The state-led bailout is seen as a sign that officials put high priority on getting Huarong’s problems under control. Foreign investors have followed the progress of the bailout as Huarong is one of the largest Chinese firms issuing foreign debt. Huarong has been able to access cheap financing as investors treated the company as a government-backed borrower. Huarong and its subsidiaries hold offshore bond debt amounting to roughly $20 billion, which according to S&P represents about 10 % of the offshore bond debt of Chinese financial firms. Until now Huarong has paid all its debt payments on time. When trading in the company’s shares resumed on the Hong Kong stock exchange at the beginning of this year, the share price dropped to about half its April level.

Many massive investments by large Chinese firms (including investments abroad) have proven unprofitable in recent years. Many of these poor bets were placed by firms tied to the state. The Chinese government has intervened directly in the struggles of core financial sector players, e.g. taking over the now-defunct Baoshang Bank and failed Anbang Insurance Group. The newest bailout round has required huge cash infusions, which means money has been diverted from more productive projects. The government has sought to quell investor expectations of implicit guarantees for state-owned firms by letting payment defaults of state firms increase. Balancing actual risk pricing and stability in financial markets has proven to be hard. There is a risk that problems emerging from individual firms can spread and disrupt financial markets, especially as ownership and debt relationships in the Chinese market are often unclear. 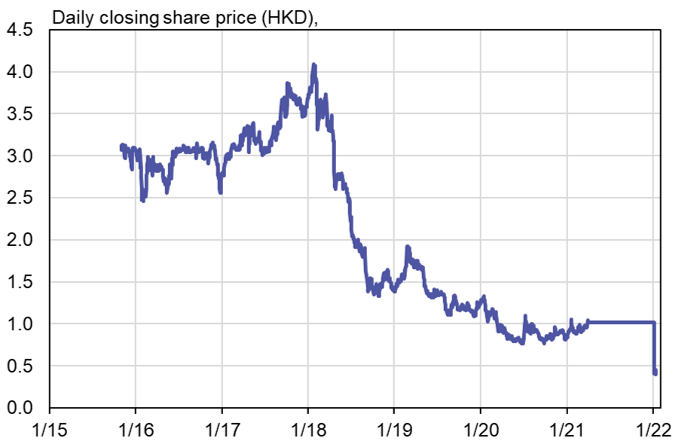