The plan is the final phase of the population policy guideline approved by president Vladimir Putin in 2007. In this stage, measures are directed both at the population as a whole and especially to families with young children and the elderly. As earlier, the action plan’s wide areas focus on e.g. improved monitoring of health by the healthcare system, development of health monitoring at workplaces, as well as improved healthcare, particularly with respect to prevention and treatment of cardiovascular diseases.

Targets for social assistance to families with young children arise most concretely in the plan. The goal is to increase the number of families that receive support upon the birth of a child from the current slightly under 2.5 million families. This will happen mainly by increasing the number of mothers receiving the one-time maternity payment (maternity capital) from the current pool of slightly over one million. Another objective is to spread streamlined child-support application processes and automatic eligibility to cover 60 % of families with young children.

The programme seeks to lower child mortality to 4.5 deaths per thousand live births by 2024. The plan also calls for development of quality standards for pre-school day-care facilities. Families with three or more children would be granted parcels of land with technical infrastructure already in place. Another objective is to reduce the number of collection cases currently clogging in the judicial system that are the result of individuals not paying mandatory child support.

Russia’s population turned to slide already before the covid pandemic in 2019. Natural population growth had been positive from 2013 to 2016, but since 2017 has been negative. The number of births and their share of the population has fallen almost continuously since 2017. Russia’s fertility rate also began to decline in 2017 (comprises women of child-bearing age, defined in the statistics as women between the ages of 15 and 49). The number of deaths, which had been on a downward trend for years, naturally rose with the ravages of the covid pandemic.

A net inflow of people through immigration has helped fully or partly offset Russia’s population decline. However, in 2020, the first year of the global pandemic, the number of migrants to Russia fell and has remained low this year. The number of people emigrating from Russia rose further in 2020 while it has since levelled off.

Russia’s population has been in decline in recent years 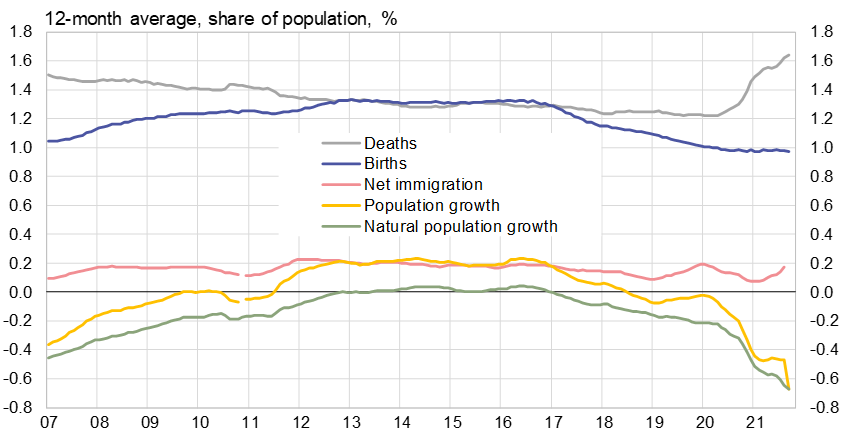