China’s large banks appear to have weathered the first year of the covid pandemic in relatively good shape. Financial reporting in recent weeks shows that most big banks managed to increase their profitability last year. Higher lending volumes helped them to overcome the narrowing of net margins and slight deterioration in their return on assets, a common measure of profitability. In contrast, small and mid-sized banks seem to have been hit more severely by the pandemic. Profits of city commercial banks and rural banks declined and their capital adequacy ratios nosedived. Even before the pandemic, several distressed small and mid-sized banks had to be bailed out with public assets.

It was initially feared that the pandemic would inundate Chinese banks with non-performing loans (NPLs). Official figures, however, suggest that the volume of NPLs for the banking sector overall only increased last year at a pace similar to that of previous years and the stock of NPLs remained a level of less than 2 % of total lending as in previous years. However, some NPLs that would have been recorded in a normal year were likely kept off the books as many small and medium-sized enterprises were granted forbearance on their loans last year, allowing them to postpone scheduled payments on principal and interest to this year. Moreover, the actual stock of NPLs held by Chinese banks is believed to be considerably larger than official reporting suggests (see for example BOFIT Discussion Paper 2/2020).

The NPL trend varied last year considerably depending on bank type. NPLs of large banks grew significantly (up by 20 % y-o-y), while city commercial banks saw their NPL volumes fall by more than 10 %. Some of the reduction in NPLs of city commercial banks may reflect last year’s completion of rescue operations for couple of city commercial banks. In addition, local governments were granted permission to recapitalise banks through issuance of special purpose bonds that would allow banks to clean up their balance sheets.

On the policy side, attention has been turning from last year’s stimulus efforts to the risks of the financial sector. At the end of March, the central bank directed banks to keep their new lending volumes at last year’s level. Tighter regulation is also planned for the large banks. Last week the central bank and banking supervision authorities released a draft version of the new banking crisis recovery and resolution plan that includes an increase in the systemically important banks’ capital adequacy ratio by 0.25 to 1.50 percentage points. The current capital adequacy ratio for large banks is 11.5 %.

Over the past decade, small and mid-sized banks have increased their shares of the China’s banking sector 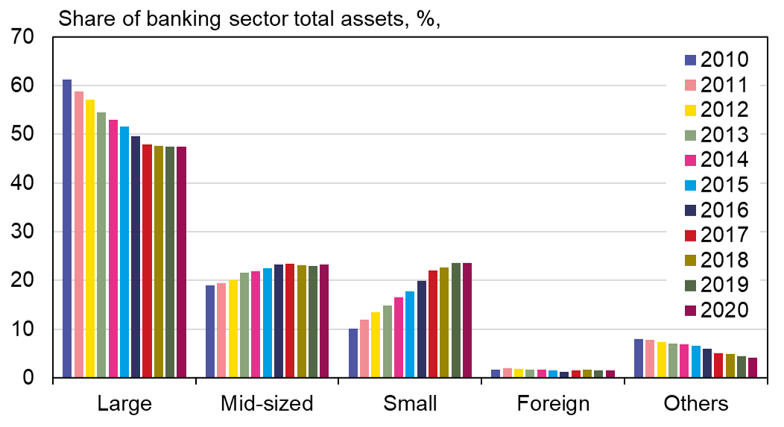