Central Bank of Russia governor Elvira Nabiullina declared that the purging of unhealthy banks from the sector is essentially complete. Thanks to a consistent policy push since 2013, the number of banks operating in Russia contracted by over half during the following six years. Most affected banks lost their licences due to violations of prudential regulations or money laundering rules. Bank mergers are still relatively rare in Russia. As of beginning December, 371 banks and 40 other credit institutions operated in Russia.

This year 33 smallish banks have seen their licences pulled, including two banks just last week. While government interest subsidies and loan restructurings have brought relief to the banking sector this year, the recession could still cause havoc for small financial institutions. The November bank health forecast from economic journal Expert RA anticipates that 35 small banks will struggle next year.

Half of Russia’s systemically important banks are either directly state-owned or owned by state enterprises. The state’s role in the banking sector sharply increased in 2017–2019, when several small and mid-sized banks were seized by the central bank, deposit insurance agency or a state enterprise. The state currently controls, either directly or indirectly, roughly 65 % of the banking sector’s total assets. The CBR is currently seeking private owners for two troubled banks it seized in recent years (Otkritie and ATB), but finding suitable buyers has not been easy. 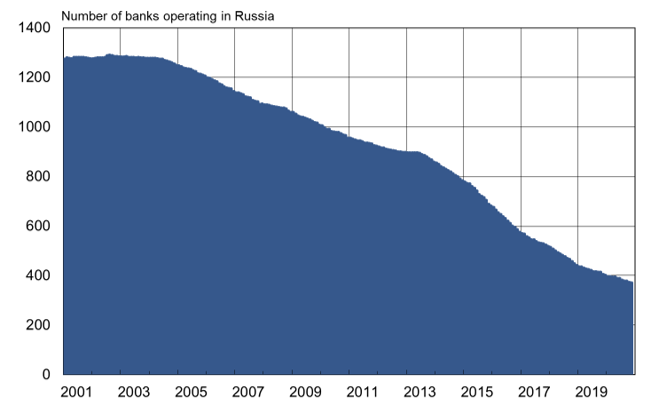