For the May-June period, federal budget revenues from oil & gas production taxes and export duties on oil, gas and oil products hit a record low, down almost 70 % y-o-y. In the 2009 and 2015 recessions, oil & gas revenues were off by 40–50 % at most. World oil prices hit bottom in April, seriously reducing oil & gas tax revenues for May-June as the delayed impact from the price drop hit budget revenues. Oil prices in the second quarter were down by more than 50 % y-o-y. The relatively slight depreciation of the ruble’s exchange rate cushioned to a rather small degree the fall of the oil price in rubles that came at 50 % from a year earlier.

Other than oil & gas federal budget revenues declined by 15 % y-o-y in the second quarter, but were roughly unchanged on-year for the first half if we exclude the CBR’s large transfer (to the federal budget) of this year’s part of the surplus the CBR gained from the government’s payment for the majority of Sberbank shares. With the CBR transfer, first-half growth in revenues other than from oil & gas taxes was nearly 20 % y-o-y. Value-added tax revenues took a notably small hit in the second quarter, dropping by 5 % y-o-y, and were essentially unchanged in the first half compared to 1H19. VAT, which currently provides the federal budget’s single largest revenue stream, has seen its share in total revenues rise to around 40 % this year.

Total federal budget revenues without the CBR’s Sberbank surplus transfer were down roughly 15 % y-o-y in the first half. In the second quarter, however, the on-year decline was around 33 %. The CBR transfer softened the decreases numbers to about 5 % and 10 %, respectively.

Budget spending, on the other hand, has soared. Expenditure growth reached almost 40 % y-o-y in 2Q20, raising the growth rate for the first half of the year to almost 30 %. Defence expenditure rose by nearly 20 % y-o-y, while other spending was up by 30 %. The federal budget adopted for this year foresees an increase of expenditures by 8 % from 2019. Actual spending in 1H20 was already more than half of the budget expenditure estimate for the year (the overwhelming majority of budget spending in Russia typically takes place in the latter half of the year).

If spending this year will be increased further to the degree suggested by prime minister Mikhail Mishustin early this month, the spending growth estimate this year rises to near 20 %. President Putin, on the other hand, said this week that there was cause to stretch the timetable for national projects announced in spring 2018 from 2024 perhaps even into the next decade. This retreat on government spending on national projects only helps to a relatively limited extent in adjusting government spending. For example, the spending on national projects in the first half of this year corresponded to less than 8 % of total federal budget spending.

The federal budget has gone from surplus to deficit. The 12-month deficit as of June was around 0.6–0.7 % of GDP. Without the CBR’s Sberbank surplus transfer the deficit would have deepened to about 1.7 % of GDP. During the remainder of 2020, the deficit will increase due to feeble revenue streams caused by low oil prices and economic contraction, and rising government expenditures.

Russian federal budget spending up, even as revenues this year fall significantly 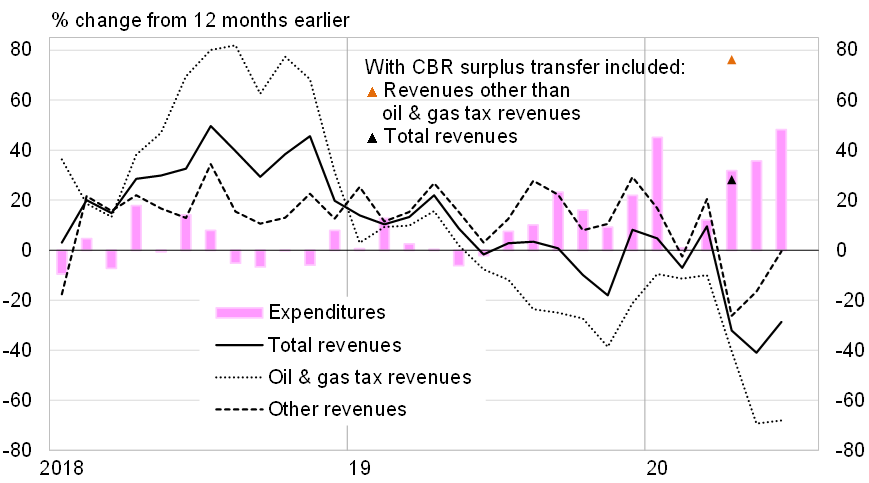