In 2019, banks’ lending to the corporate sector slowed down and the nominal value of the loan stock, calculated in rubles, increased by just 1.2 %. About a fifth of corporate lending was denominated in foreign currencies. When adjusted for changes in foreign exchange rates, the value of outstanding loans increased by 4.5 % last year, or slightly less than in 2018 (5.8 %). The growth in household lending slowed slightly last year, with the outstanding amount of household loans increasing by just 18.5 % (down from 22.5 % in 2018). Household deposits, the banking sector’s main source of financing, increased by about 10 %.

At the beginning of this year, the slight slowdown in growth of the lending stock continued, but the collapse of economic activity and the increase in uncertainty in March-April were clearly reflected in bank lending. The annual growth rate of loans to households was still brisk, but compared to March, the loan stock declined for the first time since 2015. Market participants report that new lending in April was only about half the March level. The volume of new consumer credit declined sharply, and the volume of new mortgage lending was also lower than in previous months.

At the end of March, lending to non-financial corporations increased sharply, suggesting that companies were girding themselves for impending difficulties, for example, by activating their lines of credit. Growth in corporate lending slowed slightly from March to April. 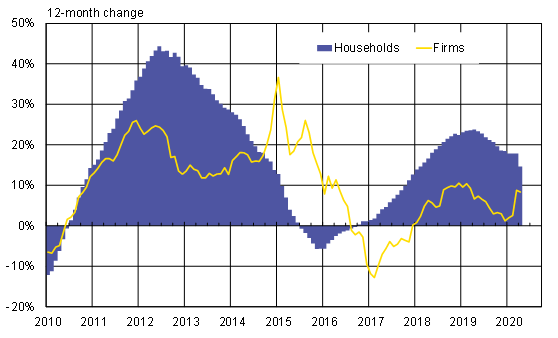