By practically all metrics, Russian economic activity collapsed in April. The economy ministry estimates that GDP was down by 12 % y-o-y in April. Industrial output decreased by 6.6 % y-o-y, while manufacturing was down by 10 %.

Restrictions on movement were most evident in retail trade, which decreased by 23 % y-o-y in April. The largest drop in consumption was seen in non-food products (down 37 %). Food sales decreased by 9 %. Although certain movement restrictions were eased or lifted in May, the on-year contraction in production and consumption likely continued.

The Central Bank of Russia publishes detailed statistics on the operation of the national payments system. During the first three weeks of May, economic activity recovered in many sectors, even if it was still lower than in previous years. Sectoral differences remained large. In some industries, payments have already returned to normal levels. Production of pharmaceuticals and health care equipment is well ahead of previous years. In service industries, in contrast, the recovery has been distinctly more sluggish. For example, there was still no recovery in tourism as of mid-May.

Russia’s purchasing manager indices recovered a bit in May 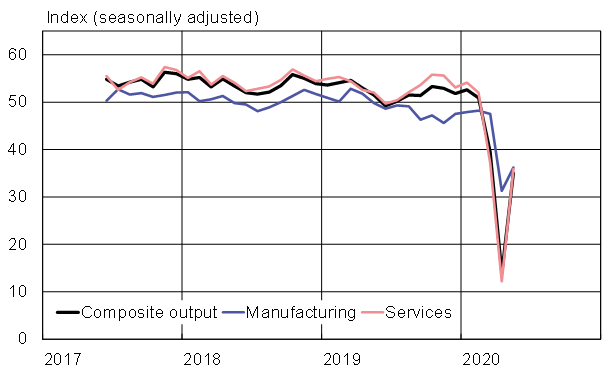