Preliminary figures indicate that Hong Kong’s seasonally adjusted GDP fell in July-September by 3.2 % from the previous quarter. As second-quarter growth was also negative (down 0.5 % q-o-q), Hong Kong is now technically in recession. Third-quarter GDP was down by 2.9 % y-o-y. Last year, the special administrative region (SAR) still experienced growth of 3 % y-o-y.

Hong Kong’s economy is quite sensitive to shifts in tourism, trade and finance. Indeed, 55 % of the SAR’s economy comes from just four branches: financial services, trade & logistics, tourism and professional services. Pro-democracy demonstrations have strongly impacted tourism, of which about 80 % comes from mainland China. Tourism flows began to decline in July and collapsed in August and September. The number of tourists arriving from mainland China fell by about 40 % y-o-y in August-September and the number of tourists coming from elsewhere fell by nearly 30 %. The lack of tourists has hurt retail sales.

The slowing Chinese economy also affects Hong Kong as roughly half of goods trade is conducted with mainland China. The volume of Hong Kong imports in August-September fell by about 10 % y-o-y, while exports were off 7 %.

The provision of financial services for foreign firms operating in China, as well as Chinese firms engaged in international expansion, are critical industries for the Hong Kong economy. Moreover, mainland Chinese have invested heavily in the local real estate market. However, there are currently no signs of major capital flight from Hong Kong.

The Markit purchasing manager index plunged from a slightly negative reading of 48 in June to 39 in October. 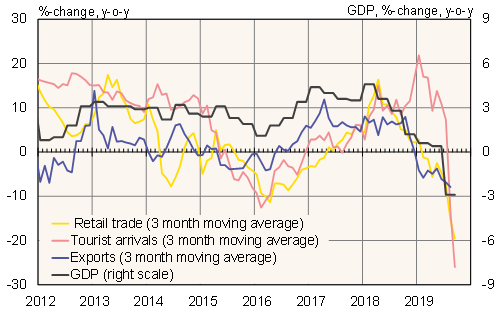